I went to my dentist for dental implants. He’s done quite a bit of them for other people so I felt fairly confident. When he went in for the first surgery, he ended up not giving me the dental implant because he said there was not enough bone structure to retain it. He suggested we do bone grafting. I agreed to that and had that procedure done. Two surgeries down. No implant. After had time to heal, we went in for the dental implant surgery again. Yet again, he said there is still not enough bone and he suggests now that I just get a dental bridge. Here’s what I want to know, is it still possible for me to get a dental implant? Did he do anything wrong? 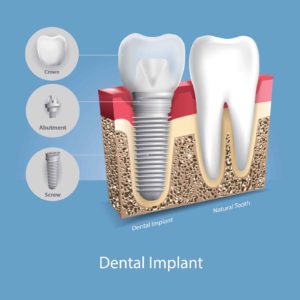 I am sorry you’ve had this experience. You must be very frustrated. I have some good news for you. It is very likely you can still get the dental implant. You will just have to do it with a different dentist. You asked me if your dentist did anything wrong. That’s hard to say. I am curious what type of diagnostics he did ahead of time to determine if there was enough bone structure, but other than that, it seems like he was genuinely trying his best to give you a good outcome.

Truthfully, one thing to be grateful for about your dentist is his integrity and desire to add to his skill set. Not all dentists are even interested in learning about bone grafting let alone try and do it. Plus, when he attempted to give you a dental implant the second time, after you did the procedure he suggested, and there was still not enough bone, he was probably horribly embarrassed.

Some dentists, with less integrity, would have just placed the dental implant knowing it would fail in a few years. Instead of trying to make himself not look bad, he told you the truth, looking out for your best interest rather than his. To me, that says this dentist is a keeper. So, even after you go somewhere else to get your dental implant, I would still use this dentist for all of your other care.

This blog is brought to you by Lafayette, LA Dentists Drs. Foreman and Thimmesch.